This is the finely engraved, hand-coloured plate 120 of Marcus Elieser Bloch's monumental work on the fishes, "Allgemeine Naturgeschichte der Fische", near-simultaneously published in A German and a French edition. Bloch (1723-1799), a German Doctor and Naturalist, is considered to be one the most important ichthyologist of the 18th-century and his collection of roughly 1500 specimens are preserved in Humboldt University's Museum für Naturkunde in Berlin. The plate was drawn by Friedrich Krüger, and engraved by C. Ludewig Schmidt. Often, such plates are found with vertical folds, indicating that they originate from octavo editions of Bloch's work. This one, however, is not folded, and it is probably an early edition, as it includes only a German and French caption. Sawfish form a spectacular shaped fish genus from all subtropical oceans and seas; all are threatened and many have become rare. Very young specimens are rarely seen, and this may be the oldest illustration of such a specimen. With ample margins. Crease in the lower right corner, some light soiling at the print edges, otherwise a fine copy. Nissen Schöne Fischbücher, 23. 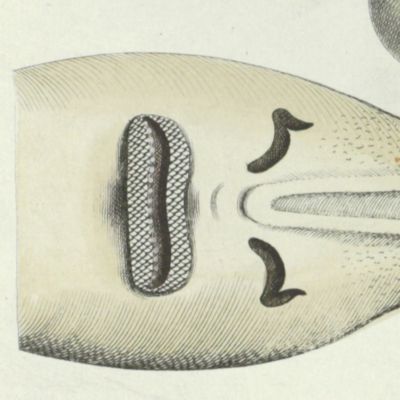