To list
« Previous Item Next Item »
A very rare large, pictorial wall chart depicting the morphology and anatomy of the grass snake

Wien, Pichler's Witwe & Sohn, ca. 1910. Very large (140 x 130 cm) broadsheet. Lithographed on two half-sheets, combined into one. Printed in chromolithography on one side.

A very rare pictorial wall chart depicting the morphology and anatomy of the snake, Tropidonotis (now Natrix) natrix (Linnaeus, 1758), or the common, non-venomous Eurasian grass snake. Paul Pfurtscheller (1855-1927) was an Austrian zoologist and natural history artist who produced a series of Zoologischen Wandtafeln (zoological teaching charts, or pull-down charts, if not mounted on cardboard) from 1902 onwards. Such charts were initially used only in German-speaking countries, but their use soon became common elsewhere. From 1877 onwards, Pfurtscheller was a member of the Zoological and Botanical Society of Vienna. He created the wall charts to illustrate his teaching lessons, and these were later used by the University Zoological Institute and highly regarded by eminent zoologists. Pfurtscheller completed 38 plates, of some 70 planned. A 39th, which showed a dissection of the Oriental cockroach, was halted by his death, but was later completed. The charts were originally published by A. Pichler's Witwe & Sohn, Buchhandlung und Lehrmittelanstalt (as is this copy), a bookstore specialising in educational literature and teaching aids in Vienna and Leipzig. Sold individually, they were often varnished, resulting in a yellowish appearance with ageing. This copy, however, is clean, as published. The first five plates went on sale in 1902. After 1926 the rights were purchased by The Hague-based publisher Martinus Nijhoff, which firm, however, used the simpler offset printing instead of chromolithography. This copy is from the earlier, and better, more richly coloured chromolithographed edition. Some light creasing, a few short tears, as usual, but generally in very good - much better than average - condition. Nissen ZBI, 3152. 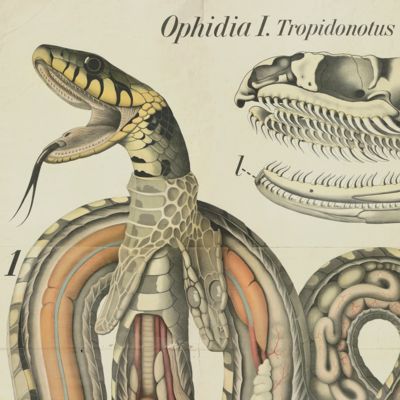