To list
« Previous Item Next Item »
With original drawings, letters, and notes by Robert Boog Watson

A unique combination of two essential papers on the non-marine malacofauna of the island Madeira in the eastern Atlantic. The second work also including a few marine species ( Truncatella, Assiminea, Rissoa). Robert Boog Watson's copies, bound together, with his autograph on the front free endpaper, and Paiva's hand-written dedication to Watson on the second blank recto. Between both works is a leaf with a smaller, bluish leaf mounted, containing original illustrations of Madeiran shells, captioned by Watson. On the verso of the half-title of de Paiva's work is a handwritten list by Watson, of the non-marine shells of the Islas Desertas, including three species marked as new. They were collected in June 1848 and communicated to Watson by the Madeiran wine merchant and entomologist Thomas Slapp Leacock (1817-1883). Also with some marginalia, in the neat old hand of Watson, including one about species discussed with Paiva. ADDED: a species classification on blue paper, written by Watson and commented upon by de Paiva; and four letters – one perhaps a draft – by Watson, written in French (one dated, Feb.21.[18]67 and with remarks by De Paiva on its verso). The Scottish malacologist Robert Boog Watson (1823-1910) wrote extensively on the marine malacofauna of Madeira, but here it is shown that he was as much interested in its highly endemic terrestrial fauna, a passion he shared with the Portuguese malacologist Barone Antonio da Costa de Castello de Paiva (1806-1879). Johann Christoph Albers (1795-1857) was a German malacologist, and one of the earliest to thoroughly research Madeiran molluscs. Further provenance: the Conchological Society of Great Britain and Ireland (their oval stamp on both title pages, and blind-stamp in plate’s fore margin; then purchased by Wheldon & Wesley (their stamp over the first Conchological Society stamp, and dated May 1954, and finally bought by the American malacologist Richard Irwin Johnson (1925-2020), with his stamp in the top margin of the first title. First title rather foxed, most plates much less so, and some occasional foxing to the text. In all a very good, and unique item. Nissen ZBI, 53 (Albers; De Paiva overlooked by Nissen). 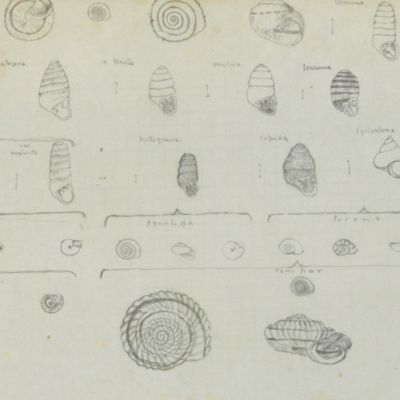