A very rare work by Johann Wilhelm Karl Adolph Freiherr von Hüpsch (ca. 1730-1805). As far as we know these are all the plates that were ever published. According to the publisher, Raspe, the plates of the second part had been in his possession for more than 20 years. He states that there should be an accompanying manuscript in the estate of Von Hüpsch, but this was never found (see the front wrapper to part II, titled "Zweiter Theil. Vorläufige Abbildungen von Tab. VIII. bis XV, which is provided here in reproduction). The text of the first part was published in 1781, but is not included here. The work contains the first illustration of Ordovician receptaculitid algae, or sponges - this has been debated ever since. Other illustrations include Mesozoic cephalopods, gastropods, bivalves, sea urchins, sponges, etc. There are known to be copies of the first part in which not all the plates are hand-coloured. A very good set. Very rareNissen ZBI, 6603. 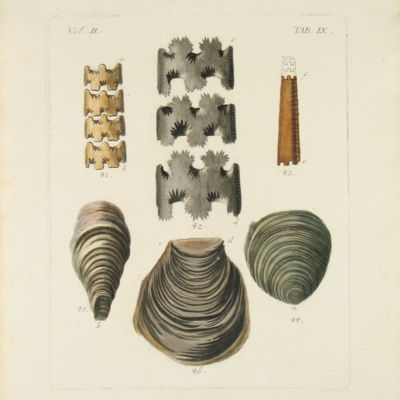