A rare, well-illustrated and varied Festschrift for one of Germany's most prominent malacologists, with contributions by Kobelt himself, and by Pallary, von Jhering [Ihering] (two papers), Haas, A. Wagner, Rolle, Schmalz, Geyer, Lindholm, Borcherding, Künkel, Hesse, Simroth, Thiele, Hoyle, Stein, Ehrmann, Jickeli, and Oscar Boettger. All papers deal with continental molluscs only, except Hoyle's contribution which is on cephalopods, and Stein's which is non-malacological. Published in the society's Abhandlungen. The use of "siebenzigsten" (instead of siebzigsten) is highly unusual; the word had already become obsolete at least half a century earlier, although in 1892 the same spelling was used for the Festschrift of the German zoologist Carl Georg Friedrich Rudolf Leuckart (1822-1898). This would also be Kobelt's last Festschrift- he died in 1916. Provenance: stamp of the American malacologist Richard Irwin Johnson (1925-2020) in the top margin of the front free endpaper, and front wrapper. Plates 14 and 15 are combined into one, double-sized plate. Wrapper edge reinforced with Japanese paper; otherwise an excellent, clean copy. Not in any major bibliography. 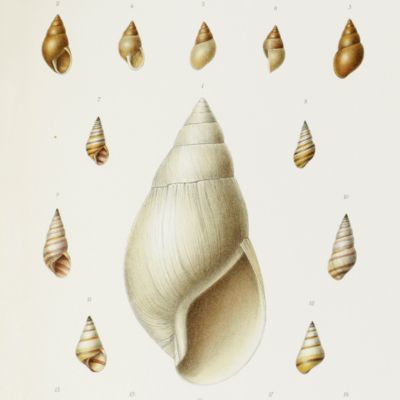