To list
« Previous Item Next Item »
Most richly illustrated edition of this influential work on the history, geography, and natural history of the Near and Middle East

The final, richly illustrated edition of this influential work on the history, geography, and natural history of the Near and Middle East by the French naturalist and explorer Pierre Belon du Mans (born 1517 – murdered in Paris, 1564). Belon travelled through these regions between 1546 and 1550 and made numerous observations on the plants and their use, on animals (including a great deal on herpetology), people (with their various costumes) and towns. The work includes a map/view of Alexandria, and of the Sea of Marmara. The two fold-outs are missing, as usual. Belon's reports are generally correct and not rooted in fantasy and hearsay as is often the case with his contemporaries, the sole exception being the illustration of a small dragon-like creature. Other woodcuts show trees, birds, mammals, snakes, a crocodile, a giraffe, a lobster, etc. Two illustrations cut short in the margin with minor loss. A fine copy in an attractive binding. Brunet, 4533, p. 762; Nissen ZBI, 304. 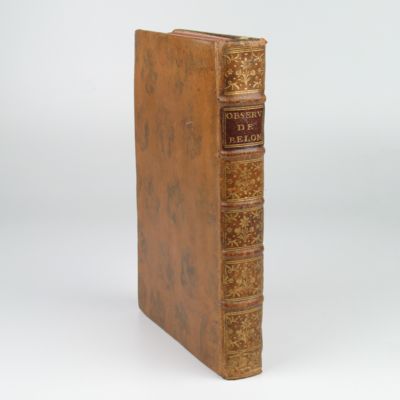