Written by the zoologist Jacob Theodor Klein (1685-1759), who coined the word herpetology, which was used for the first time in this work. Klein included snakes, and leg-less lizards, as well some invertebrates, but not turtles and crocodiles. Provenance: the fine, pictorial bookplate of the American zoologist and marine biologist Charles Atwood Kofoid (1865-1947) mounted on the front pastedown; signed by the American herpetologist Hobart Muir Smith (1912-2013) on the front free endpaper recto, and a pencilled note, presumably by the Swedish herpetologist Richard Wahlgren (1946-2019) "From Kraig Adler 6.II.95 ... xchange with Prince Max + others". "At 100 years of age, [Hobart Muir] Smith continued to be an active and productive herpetologist. Having published more than 1,600 manuscripts, he surpassed all contemporaries and remains the most published herpetologist of all time" (Wikipedia). Richard Wahlgren once had one of the largest - if not the largest - herpetological libraries in Europe. Boards rubbed; a few marginalia in an old hand. Endpapers and a few adjacent leaves mildly foxed, but mostly very clean, and in all a very good, unmarked copy. Rare. Only three auction records in the last 50 years. Adler I, pp. 9-10; Cat. BM(NH) p. 992; Nissen ZBI, 2210. 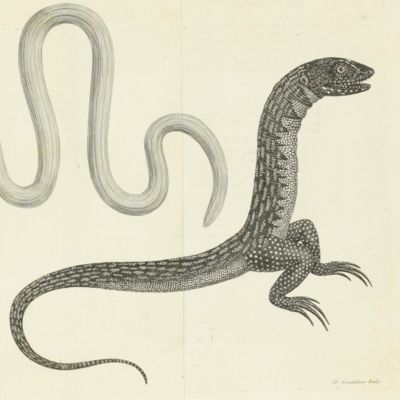