Magnificent and exceedingly rare work by the Czech geologist, palaeontologist, and ornithologist Antonin Frič, or, in German, Anton Fritsch (1832-1913) on the rich Permian and Carboniferous faunas of Bohemia. Fritch was professor of geology at the Polytechnikum in Prague, and founder and member of several natural history societies in Bohemia. “Professor Antonin Fric … is considered by many to be the greatest Czech museologist, pedagogue and educationalist of the nineteenth century. He devoted his life to the Czech Museum (Museum of the Czech Kingdom, now the National Museum). From 1855, he was curator of the zoological collections. In 1864, he founded the Geological-Palaeontological Department and from 1871 was Professor at Prague University. In 1880, he was made Director of the Zoological and Palaeontological departments of the Museum. He travelled widely, including to Great Britain, the Mediterranean and the USA. His main works in zoology were monographs on European birds and Czech bats, fish and crustaceans. In palaeontology, he wrote on the stratigraphy and palaeontology of the Czech Upper Cretaceous, Carboniferous and Permian fauna. He also published several important books about the popularisation of geology and palaeontology” (the Edinburgh Geologist, 38). The Fauna der Gaskohle contains the description and fine illustrations of many early vertebrates, notably fish, amphibians, and reptiles, generally described from well-preserved specimens. The last volume deals with invertebrates, including many myriapods, several spiders, some insects, crustaceans, and bivalves. Fritsch introduced many new names, most of which still valid today. Fritsch himself published the work, clearly in low numbers, and over a long period of time, which explains its rarity, especially of complete copies in original bindings. The last volume has 1901 on the title page, but Horn-Schenkling dates it from 1899. The total numbers of text illustrations as given by Fritsch on the title pages, and the actual numbers do not match, because Fritsch also counted figures with a b-number. This set has a label on the front pastedowns stating, "Presented to the Imperial College of Science Geology Department from the library of John Walter Gregory [name handwritten] 1934." Gregory (1864-1932) was a British explorer and geologist, perhaps best known for his survey of the Great African Rift Valley. He was the successor of Frederic McCoy as chairman of the Geology Department of the University of Melbourne, Australia. Slight rubbing to joints and spine ends (one a bit more so). Bookplate on the front pastedowns, stamps and a small label on front endpapers; and a stamp in the top-margin of the title pages, a few light spots, otherwise a very good, clean set. Extremely rare in a complete state. We know of no auction records in the last 50 years. Only one complete set in modern binding has been listed in an antiquarian catalogue in the last four decades. Horn-Schenkling II(2), p. 89; Nissen ZBI, 1438. 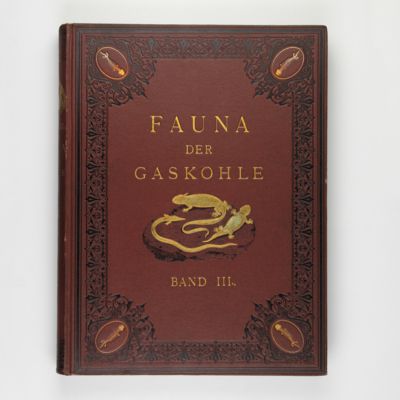