This plate depicts three species of the clawed frog genus Xenopus, principally of a new species, X. rothschildi, with four figures including three of complete animals, and two others, namely Müller's platanna X. muelleri (Peters, 1844), and the well-known African clawed frog, X. laevis (Daudin, 1802), both represented by comparative line engravings. The plate was lithographed by J. Green, the well-known London-based lithographer. The new species name suggests that the new species was obtained during one of Baron Rothschild's expeditions, perhaps the one to the northeastern part of Africa in the years 1904-1905. In this region X. laevis does not occur. In any event, the name Xenopus rothschildi was never published (see, e.g. Tinsley and Kobel, 1996). Very rare, perhaps unique. 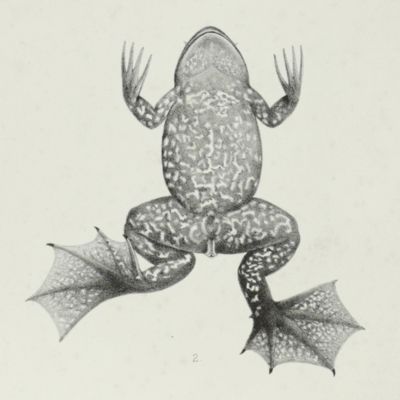