In 1799, the German historian Wilhelm Gottlieb Becker (1753-1813) published a work in two volumes titled Der Plauische Grund bei Dresden, mit Hinsicht auf Naturgeschichte und schöne Gartenkunst. Mit fünf und zwanzig Kupferblättern. Becker’s work consists of two volumes, issued simultaneously. The first was entirely written by himself, the second, however, was by various other authors. On pages 115-120 is a chapter on the entomology of Plauen (not to be confused with the town of Plauen, also in Saxonia) by Peter Ludwig Heinrich (Baron) von Block (1764-1818), with very fine, highly enlarged illustrations of new and poorly known insects from South Eastern Germany, mainly beetles (i.e., ten species of Staphylinidae or rove beetles) which cover just over half the plates, and some Diptera, Hymenoptera, and Hemiptera. The name of the illustrator remained unknown, but recently these four Musterblätter (proof plates) turned up at auction in a map of printed leaves associated with the renowned German natural history artist, engraver, zoologist and publisher Jacob Sturm (1771-1848). Although his name is not attached to these leaves, the accurate, ‘modern’ style - with a great eye to detail - certainly points strongly in his direction. The usual bibliographies, for instance those listed below, do not mention the name of the artist of von Block's paper. The word Müster [Proof] written in an old hand in the lower margin of two plates. Plates somewhat soiled, but otherwise in a very good condition. Cat BM(NH), p. 120; Hagen I, p. 58; Horn-Schenkling, 1643. Not in Nissen. 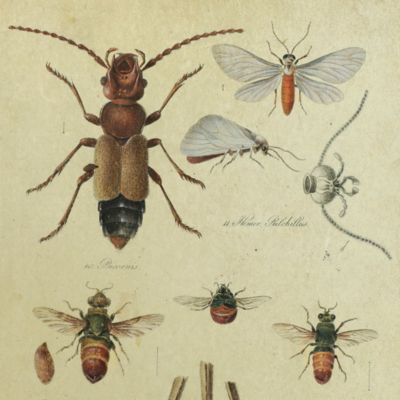