Exceedingly rare book on butterflies, not in any bibliography

An unrecorded and very important publication on the larger and most colourful butterflies of the world with very fine, detailed, and beautiful images of Macrolepidoptera with many new, available names and quite possibly including several that are the valid names of the species figured. This publication is not recorded by any bibliographer, such as Brunet, Hagen, Horn-Schenkling, and Junk, thus of great rarity. This is most peculiar as the images are very well executed, accurate and certainly of scientific merit. It was apparently published, or to be published, by the author, Jean Delarue, an accomplished bird painter. He contributed 30 superb plates to Alcide d'Orbigny's Galerie ornithologique, published between 1836-1839 (vide Sitwell), and at least two other very rare bird books, namely Études d'animaux dans le paysage; Oiseaux d'Europe and at least one big and important work on entomology, Histoire naturelle des lépidoptères ou papillons de France by Godart and Duponchel. Delarue was a highly gifted artist in the natural sciences, about whom little seems to be known. He was responsible for many insect plates in Charles d'Orbigny's Dictionaire Universel… (1849), and also, according to Ronsil (p. 69) in his L'Art Français (1958) for the four plates in John Kirk Townsend's aborted and mythically rare Ornithology of the United States of North America (1839), sometimes mistakenly attributed to 'Delorme'. In describing this and the similarly formatted work by Delarue and de Vresse, Oiseaux d'Europe, Ronsil remarks (p. 69) in L'Art Français: "Soigneusement coloriés au pinceau à lépoque, la plupart de ces lithographies constituent de delicieuses petite estampes d'une extrême délicatesse." "Mrs. Jackson, in her Dictionary of Bird Artists of the World (1999) tells us (p. 220) that Jean Delarue was the name of both a father and son who specialized in various aspects of natural history depiction." (Richard L. Soffer, in Amherst edu). Regarding the Jackson quote, Benezit lists two Jean Delarues; however, one is from the 16th century. After a few plates were printed by Delarue, it must have been handed over to another more experienced publisher, namely Arnauld de Vresse, who in turn must have done little to distribute the work although half the plates and the gilt-lettered title page were printed on his behalf. The butterflies depicted have been named according to the Linnaean binominal system, and the localities for each are given. In all the years we have been dealing in rare books we have seen this work only once, but that copy had a red binding, instead of a green one. It definitely deserves the attention of one or several specialist lepidopterologists, if only to discover exactly how important this unknown book is and exactly where it stands in the history of entomological science. Tiny printed bookseller's label "Rousseau Girard Livres d'Histoire naturelle 7, rue de la borse, Paris" mounted on the front free endpaper recto. read more
Last endpaper irregularly toned, some light, marginal thumbing, one plate with a faint marginal damp stain; however, in all a very good copy, with bright colouring. Benezit 3, p. 144; Ronsil Bibl. Ornith. Fr., 780; Sitwell, p. 92 [not this work]. read less
Very flexible return policy
Secure payments by Adyen
Sent in 2 business days with Track & Trace 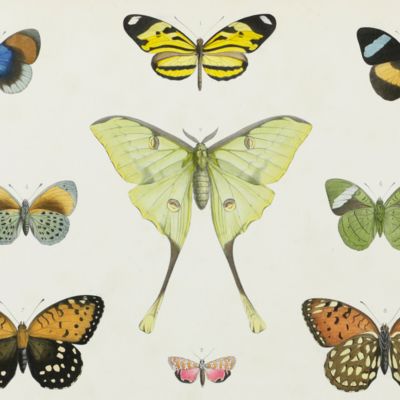