A very rare work with "[e]xcellent plates" (Vanzolini) of great taxonomical importance, written by the German-Dutch herpetologist and ornithologist Hermann Schlegel (1804-1884). This was Schlegel's first major work - and his rarest. OCLC reports just nine copies in libraries worldwide (in Australia, Canada, Germany [three copies], Great Britain, USA, and Switzerland) some with either only the text part, which was published in octavo, or only the atlas. We found only two auction records, including a partial (27 plates) atlas. "Schlegel was tutored by the pastor and ornithologist C. L. Brehm, father of Alfred Brehm who authored the 'Thierleben' series. [M]ost of Schlegel's early work was on reptiles. Beginning in 1837 and concluding in 1844, Schlegel issued a series of 50 outstanding folio plates of amphibians and reptiles in his 'Abbildungen', together with a short text, illustrating many new species, particularly from the rich fauna of the Dutch Indies.... [G]enerally unrecognized was Schlegel's discovery and nurturing of three of the century's greatest natural history artists - J. G. Keulemans, Joseph Smit, and Joseph Wolf. Schlegel was one of the most prominent naturalists of his era, concerned with fundamental questions of the definition of species, the relationship of systematics to physical geography, and the biological meaning of variation. It was he who first used trinominal nomenclature" (Adler). Plate 32 is plain, as intended. All others are superbly coloured. Minimal spotting to only a few plates, but generally clean and bright, the colouring accurate and vivid. The binding is very attractive. Adler I, pp. 30-31; Cat. BM(NH) p. 1838; Nissen ZBI, 3680 [recording a wrong number of coloured plates]; Vanzolini I, p. 56. 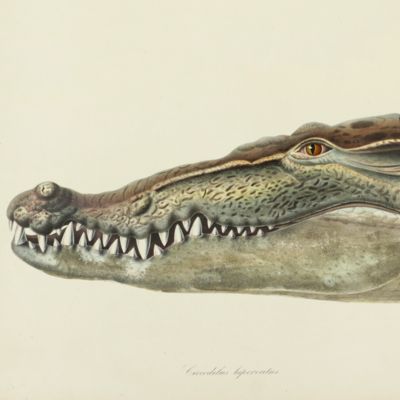