An account of Indian serpents collected in the coast of Coromandel; containing descriptions and drawings of each species; together with experiments and remarks on their several poisons. [WITH] A continuation of an account of Indian serpents containing descriptions and figures from specimens and drawings transmitted from various parts of India. [Complete].

A splendid, rare work including the extremely rare second part (published by G. and W. Nicol) with original hand-colouring. Written by the Scottish physician and naturalist to the British East India Company, Patrick Russell (1726-1805). According to Adler, this work "may well be the most physically imposing book ever written exclusively on a herpetological topic". All species are extensively described, and their local names are added. In several, orthographic varieties are noted between the name as noted in the descriptive text and the same on the plates. "As a physician as well as a naturalist to the East India Company in the Carnatic he was concerned with the problem of snakebite and made it his aim to find a way for people to identify venomous snakes. He also made a large collection of plants. One of the snakes he identified was Katuka Rekula Poda which he noted was not well known to Europeans but was second only to the cobra in its lethality. Russell attempted to classify the snakes using the nature of scales but his quest was to find an easy way to separate the venomous snakes from the non-venomous. He conducted envenomation experiments on dogs and chicken and described the symptoms. He tested remedies claimed for snakebite" (Wikipedia). Indeed, in this work several experiments with snake venom and possible cures are described. The three appendices contain papers and illustrations published earlier, in a smaller format, in the Philosophical Transactions of the Royal Society of London. Provenance: Newcastle-upon-Tyne Public Library (their labels on front pastedown and front free endpaper recto, and their small, weak stamp in several text page margins, and unobtrusive and weak blind-stamp on lower plate margins); purchase note on front free endpaper by the Swedish herpetologist Richard Wahlgren. Slight rubbing to board edges. Weak, small library label in the top margin of the last index page; weak, circular dampstain to the lower margin of the portrait frontispiece, some occasional light spotting; pencilled annotation, dated 1852 on Plate 16 of the first part; otherwise an excellent copy. Of copies including the second part, we found only three auction records in the last 50 years. OCLC is vague about the number of complete, originally coloured copies, but the number is probably lower than ten, worldwide. Many copies are not coloured, incomplete, or severely affected by humidity and worming. This copy, however, is in a very good condition, with most plates clean, and the colouring bright. Adler I, pp 16-17; Cat. BM(NH) p. 1770; Crane Library, AC10 (first part only); Nissen ZBI, 3539; Wood, p. 547. 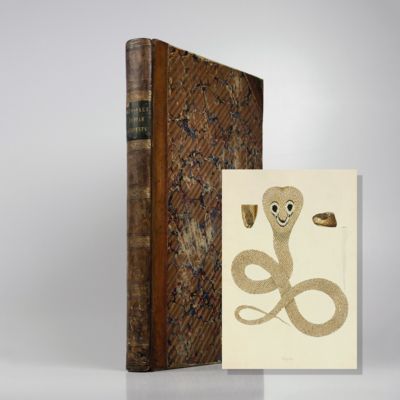 An account of Indian serpents collected in the coast of Coromandel; containing descriptions and drawings of each species; together with experiments and remarks on their several poisons. [WITH] A continuation of an account of Indian serpents containing descriptions and figures from specimens and drawings transmitted from various parts of India. [Complete].