A unique dedication copy - with additional letter - of a rare work on the marine molluscs found in the immediate vicinity of the South African town of Port Alfred, and Port Alfred itself. The author, Lieutenant-Colonel William Harry Turton (1856-1938], a great-nephew of the British malacologist William Turton, had sent shells to E. A. Smith of the British Museum and, later, to Paul Bartsch of the United States National Museum (Smithsonian) but was quite dissatisfied with both men's treatment of his material. Finally he decided to publish a great number of new species himself. Turton was convinced that many species were endemic to the area covered. The total print run of this work must have been low as the work is quite rare. This copy is very well preserved, with hardly any shelf wear, except for some creasing to the right side of the spine. Presentation copy. With a handwritten dedication by the author to the Conchological Society of Great Britain and Ireland, dated Christmas 1932. Losely inserted is a letter by Turton, presumably directed at the secretary or chairman of the Society, dated 20 December '32, about the book (e.g. "I think the plates have, on the whole, come out very well, considering the large amount they have been magnified - 50 times in some cases"), with the Society's stamp. Also inserted is a sales-pamphlet, including "Opinions of the press", and such remarks as "I collected these shells on six visits to Port Alfred between 1902 and 1931, staying there altogether 42 months", and "The chief collection I have given to the Oxford University Museum, where it is now exhibited : and smaller ones to the British Museum, and the Museums at Paris, Washington, Berlin, Cape Town and Grahamstown". Library label of the Society on the front pastedown, with a handwritten annotation, stating that the book was presented by the author in December 1932; a stamp of Wheldon and Wesley, dated May 1954 superimposed. Small stamp of the American malacologist Richard Irwin Johnson (1925-2020) in the top margin of the front free endpaper recto. Some light spotting to the edges, and the frontispiece plates (showing the shell cabinet with the specimens in 1930), and the last few plates; otherwise it is clean inside. A very good copy. Dance, A history of shell collecting, pp. 179, 251. Not in Nissen. 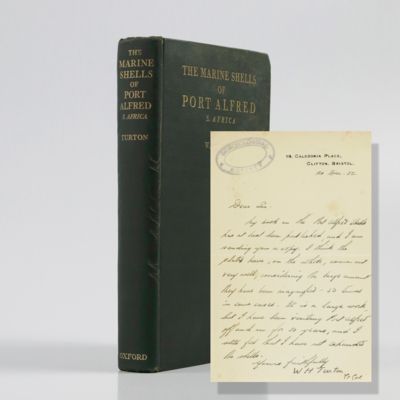