Down and London, Elliott and Fry, [1874]. Albumen print, mounted on cardboard with rounded edges and a red ink border (10.0 x 6.2 cm). With the name Darwin printed in black below the photo, and red, crowned logo on verso. Preserved in transparent sleeve.

Carte de visite. With a fine, crisp portrait of Charles Darwin at an age of ca. 68 years. This photo was probably made in the studio of Elliott & Fry, in 1874. "...while Darwin wrote and published two of his most important evolutionary tracts - Descent of Man and Expression of the Emotions in Man and Animals - he took a hiatus from sitting for his photographic image. Once these books were out, however, he needed an updated carte-de-visite that he could send out to his friends and supporters. He turned, again, to the photographers who had made his most recent cartes, Elliot and Fry". They produced at least four different poses, which Darwin would have sent to friends and admirers." (Darwin Project - photographic portraits). Helvert and Van Weye gave the four known poses the letters a to d. This card is of their type b.4. The card bears the printed number 1391, and on its verso a red monogram "P". Very rare in such excellent condition. Helvert and Van Weye, Darwin: a companion, 1874 b.4 (p. 175). Not recorded by Freeman. 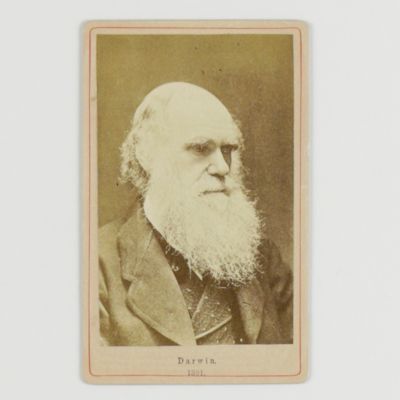