A fine print by the Dutch painter, sculptor, engraver and early caricaturist, Romeyn de Hooghe (1645-1708). He "... was a skilled etcher, draughtsman, painter, sculptor and medalist. He is best known for political caricatures of Louis XIV and propagandistic prints supporting William of Orange. He was also active as an erotic artist and some of his political propaganda prints can be considered early, prototypical comic strips" (Wikipedia). The illustration depicts a scene of the siege and conquest of the town of Grave in the Netherlands. "The siege of Grave, also known as the capture of Grave of 1586, took place from mid-February to 7 June 1586 at Grave, Duchy of Brabant, Low Countries (present-day the Netherlands), between the Spanish army led by Governor-General Don Alexander Farnese, Prince of Parma, and the Dutch-States and English forces under Baron Peter van Hemart, Governor of Grave, during the Eighty Years' War and the Anglo-Spanish War (1585-1604)" (Wikipedia). One of a suite of six of identical size, all with scenes from this battle. The print is not signed, but according to Frederik Muller "with certainty by Rom. de Hooghe", and stated this print to be very rare. A few, small smudges, mostly on the mount, otherwise very good, with a strong impression. Muller, F. (1863) De Nederlandsche geschiedenis in platen: beredeneerde beschrijving ..., Part 4, p. 388. 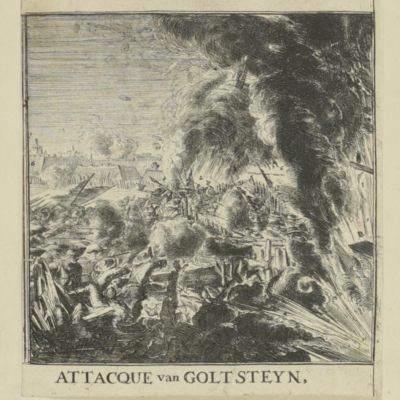