For the series Historia Fisica, Politica y Natural de la Isla de Cuba, edited by Ramón de la Sagra (1801-1871). The bird part of the zoology section (published in 1839) was written by Alcide d'Orbigny (1802-1857) and illustrated by the great natural history artists Édouard Traviès de Villers (1809-1876) and Jean Gabriel Prêtre (1768-1849). Apparently, this work was considered to be beautiful enough to warrant a separate edition for a wider public, using the same plates and artists. De La Sagra provided a new introduction and synoptic table and dedicated the work to the young Spanish heir Isabella II. Nissen and Zimmer list the French version (1843). In this copy, however, it is combined with the very rare earlier Spanish edition (1842). Provenance: a dedication by De La Sagra himself to a "Madame Wakefield", about whom nothing else is known, and an armorial bookplate of the Anglo-British botanist and ornithologist Henry Rogers Broughton, 2nd Baron Fairhaven (1900-1973), mounted on the front pastedown. Broughton was renowned for his exquisite botanical-ornithological library. Some scattered spotting, mainly to the French text and tissue-guards; one plate (Pl. VIII) toned. Most text and plates, however, unusually clean, the images vividly coloured and of an extremely high quality and precision. A very fine copy. All major ornithological bibliographies list the French edition, apart from the catalogue, Ornithology Books, Trinity College, Hartford, p. 207, listing a very incomplete Spanish copy. There are only four Spanish copies known in libraries worldwide, of which three are in the USA and only one in Europe, in the Biblioteca National de España in Madrid. A 'double text' copy, such as this one, is unrecorded. Anker, 383 (under d'Orbigny, French edition only); Sitwell, Fine Bird Books, p. 137 (French ed. only); Zimmer, pp. 538-539 (French ed. only). 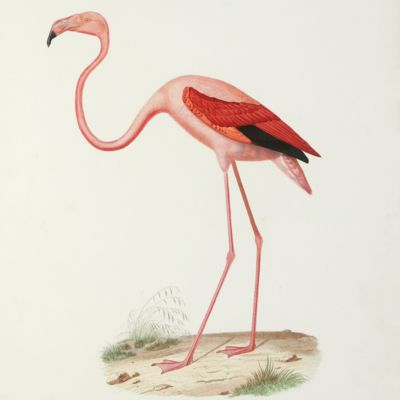