A very rare set of a scientific periodical initiated and edited by the French naturalist Jean-Baptiste Geneviève Marcellin Bory de Saint-Vincent (1778-1846). The first volume, dedicated to Alexander von Humboldt, includes several papers by the polymath, Constantine Samuel Rafinesque-Schmaltz (1783-1840), including his Monographie des coquilles bivalves fluviatiles de la rivière Ohio, contenant douze genres et soixante-huit espèces (actually 69 species, and including three plates), a work that is essential to North American malacology. Well-illustrated, with many hand-coloured plates (e.g. Bory on mining the Sint Pietersberg in Limburg – known for its Cretaceous fossils; Drapiez with a series of many papers, mainly on new beetles, each with one hand-coloured plate; Van Mons, a similar series, on pomology; Schweigger, on fossils in amber; Bory on Ferussac's land snails, etc., etc.). Several papers are on chemistry; a few illustrated papers deal with machine building, but the vast majority are on zoology and botany. Volume VIII was the last published. Uncut, (thus) frayed and creased at fore-edges, one spine split and a few wrappers detached. Frontispiece portraits – seen in some copies – are not present, and it seems that they were never included in this set; all scientific plates, however, are present. Bindings rather weak, a few spots, but generally quite clean, unmarked and completely in original condition. We have never had another set. There are no auction records after 1952. Cat. BM(NH) Serial titles1, p. 106. 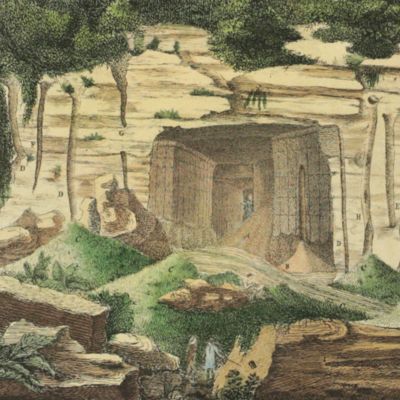