A monograph of the Coraciidae or family of the rollers.

A superb copy of what is one of the most beautiful bird monographs ever published: "A thoroughly detailed study of the group, with excellent hand-colored plates" (Zimmer). Written by the British ornithologist Henry Eeles Dresser (1838-1915), and illustrated by the famous Dutch bird illustrator John Gerrard Keulemans (1842-1912). Keulemans engraved the plates, and coloured the plates himself (see Jackson, who regards this a special category, 'hand-coloured autolithographs'). The Coraciidae are known as rollers "because of the aerial acrobatics some of these birds perform during courtship or territorial flights. Rollers resemble crows in size and build, and share the colourful appearance of kingfishers and bee-eaters, blues and pinkish or cinnamon browns predominating" (Wikipedia). Rollers occur mainly in Africa, and Asia. There is one European species. With an author's inscription, in the top margin of the title page, viz., a dedication to "Colonel Magrath with kindest regards from H. E. Dresser". This, most probably, being the British ornithologist Lieutenant-Colonel Henry Augustus Frederick Magrath (1867-1940). Provenance: armorial bookplate of Ossory with the motto "Comme je trouve" (Kilkenny College, Ireland) mounted on the front free endpaper recto; armorial bookplate of the Anglo-British botanist and ornithologist Henry Rogers Broughton, 2nd Baron Fairhaven (1900-1973), mounted on the front pastedown. Jackson, Bird Illustrators. Some Artists in Early Lithography, p. 91; Keulemans and Coldewey, Feathers to Brush, the Victorian Bird Artist John Gerrard Keulemans pp. 31, 61; Nissen IVB, 270; Sitwell, Fine Bird Books, p. 92; Zimmer, p. 178. 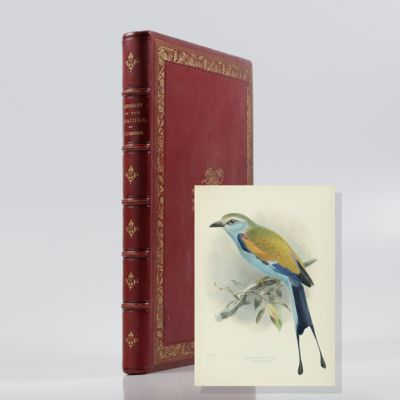 A monograph of the Coraciidae or family of the rollers.