A wonderful collection, sumptuously bound, of magnificent watercolours of British mushrooms, each enriched with detailed information on the collection locality and date. A postcard, mounted in front, signed M. J. Berkeley, deals with this collection: "Dear Sir, the drawings arrived in perfect order and are excellent. There are very few that I shall not be able to name. Those which are correctly named I mark with a note of admiration!". Miles Joseph Berkeley (1803-1889), vicar of Sibbertoft, described over six thousand species of fungi and is considered the father of modern British mycology. He produced an herbarium of nearly ten thousand species of fungi, now preserved in the collections of the Royal Botanic Gardens at Kew. The note was directed to a relative, R. Berkeley (most probably Robert Valentine Berkeley [1853-1940]) of Spetchley Park, Worcester, i.e. the estate of the Spetchley Berkeleys, to which Miles belonged, and who showed a broad interest in natural history. This estate even had a 'museum room', filled with naturalia. Localities, however, are in or near Hodder, a village (and a river) in Lancaster. The species numbering probably refers to a fungi species catalogue, perhaps Berkeley's own. Further provenance: on the front pastedown a large mycological bookplate of the British mycologist Jack Raleigh Henchman Nash-Wortham (1916-1971), and, below, a small, mycological-culinary bookplate of the grand gastronomical library of Jacques and Hélène Bon. The Bon library was assembled over a very long period, and sold some time after Jacques Bon's death on 15 January 2015, at the age of 91. Some age-wear to the boards; otherwise excellent. 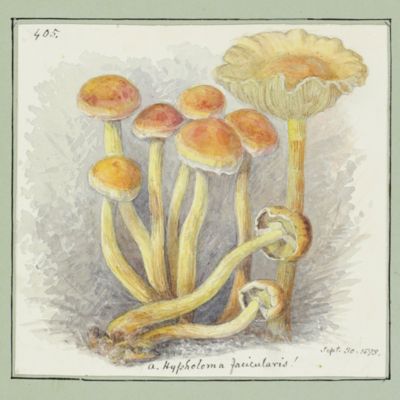