The most spectacular parrots in the world

The French ornithologist, botanist and natural history illustrator Jean Theodore Descourtilz (1796-1855) was responsible for both the magnificent plates and the informative text. Some sources claim he was born in 1798, which may well be correct. Descourtilz "... arrived in Brazil in about 1826, [He] was an interested and meticulous observer, concerned about the accuracy of his notes which concisely described the habits and appearance of each species. His poetic and flowery text was in keeping with the period, and was invariably accompanied by colour plates of the species studied" (Wikipedia). He died suddenly in 1855. This work depicts some of the most spectacular tropical birds in the world - many from the Amazon region - including toucans, parrots, and hummingbirds. This plate shows four spectacular parrots, viz., the blue-and-yellow macaw, the chestnut-fronted macaw, the scarlet macaw, and a colour variety of the latter. Borba de Moraes and Zimmer state that an English edition was published in 1856, with plates printed in London by Waterlow & Sons, chromolithographers. However, Waterlow plates have also been found combined with the 1852 French text, and probably all plates were printed by Waterlow. Very weak toning and minimal, faint spotting and creasing at the edges, otherwise exceptionally fine, clean. Borba de Moraes I, pp. 260-261; Nissen IVB, 236; Nissen ZBI,1088 (part); Sitwell, Fine Bird Books, p. 90; Zimmer, p. 166. Neither in Anker nor in Ronsil, Bibliographie Ornithologique Française. 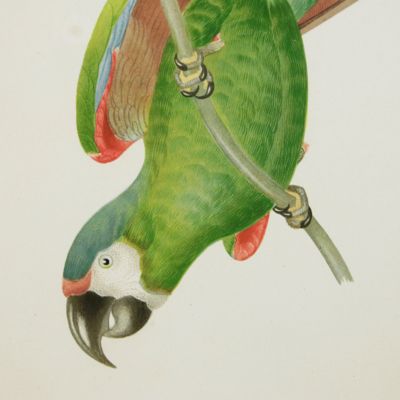