To list
« Previous Item Next Item »
A dedicated follower of Rembrandt

[Portrait of man with hat]

Portrait drypoint, after Rembrandt, by the Dutch artist Jan Chalon (1738-1795), signed by the artist. An excellent example of the drypoint skills of this painter and engraver who was an important artist in his own right. According to Benezit he was born in Amsterdam and travelled to Paris and London, where he died. His "Rembrandtesque" drypoint engravings were made between 1788 and 1793. "The lines produced by printing a drypoint are formed by the burr thrown up at the edge of the incised lines, in addition to the depressions formed in the surface of the plate. A larger burr, formed by a steep angle of the tool, will hold a lot of ink, producing a characteristically soft, dense line that differentiates drypoint from other intaglio methods such as etching or engraving which produce a smooth, hard-edged line. The size or characteristics of the burr usually depend not on how much pressure is applied, but on the angle of the needle. A perpendicular angle will leave little to no burr, while the smaller the angle gets to either side, the larger the burr pileup. The deepest drypoint lines leave enough burr on either side of them that they prevent the paper from pushing down into the center of the stroke, creating a feathery black line with a fine, white center. A lighter line may have no burr at all, creating a very fine line in the final print by holding very little ink. This technique is different from engraving, in which the incisions are made by removing metal to form depressions in the plate surface which hold ink, although the two methods can easily be combined, as Rembrandt often did. Because the pressure of printing quickly destroys the burr, drypoint is useful only for comparatively small editions; as few as ten or twenty impressions with burr can be made, and after the burr has gone, the comparatively shallow lines will wear out relatively quickly." (Wikipedia). Paper slightly age-toned, otherwise in good condition. A very good copy. Benezit 2, p. 418. 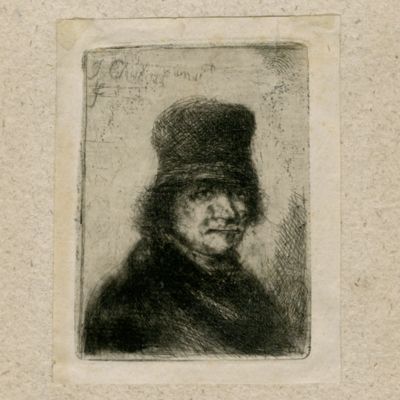 [Portrait of man with hat]