Group of people in landscape including children and domestic animals.

A Chinese reverse painting on glass. This method of painting has a long history in China. These kind of paintings reached Europe in the 18th century and immediately became quite popular. Many were deliberately made for export. Due to their fragility, few examples have survived until this day, and they are therefore much sought-after, fetching high prices at auction. A painting of this unusually large size is not very common. This is an example from the late Qing-dynasty. It likely depicts a ceremony, as the children's toys each carry a red ribbon and light. The toys are all animals (a dog, deer, hog, and falcon). A very decorative and amazing painting in a very good state, with bright and vivid colouring. The frame is very good, and in its original state. 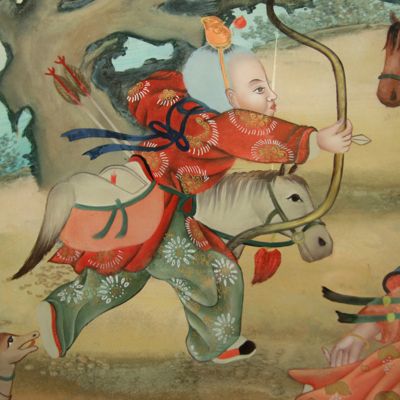 Group of people in landscape including children and domestic animals.