A very rare contemporarily coloured plate published in the atlas of the first - folio - edition of the famous great Encyclopédie ou Dictionnaire raisonné des sciences, des arts et des métiers, a massive work, edited and partly written by Diderot, d'Alembert and Voltaire, being the first true encyclopaedia, epitomizing the age of Enlightenment. Published between 1751 to 1772, it synthesized the knowledge of the time. It became not only a source of knowledge, but also a political weapon on the battleground for power between secular and ecclesiastical thinkers and writers. The plate was drawn by François Nicolás Martinet and engraved by Robert Bénard. Its dimensions indicate that this plate comes from a large-paper copy, which, according to Brunet, "...sont assez rares". Brunet does not record coloured copies. Plates with modern colouring are not unheard of, but this is altogether different - not only is the colouring very well done, but the printed border is carefully gilted too (often yellow in modern colouring). The animals figured are the Eurasian and North American Lynx (figure 2, top), and the North American Cougar, or Mountain Lion (figure 1, bottom). The engraving is by Prévost, after an original drawing by Martinet. Pinpoint holes in the left margin, and a thin red line on the other three edges indicate that this plate comes from a once bound copy. Small chip in lower left corner, a tiny smudge in the left margin, otherwise a very good copy. Brunet 2, pp. 700-701; Nissen ZBI, 4622; PMM, 200. 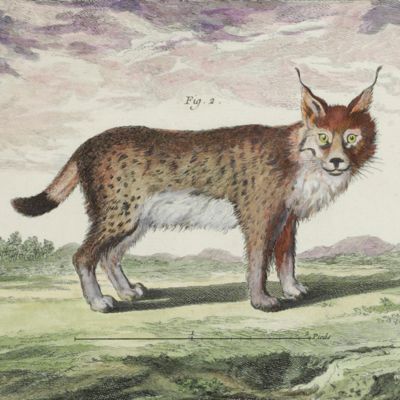