The first English edition of a stunningly bound and illustrated book

Nile-sketches painted from nature during his travels through Egypt.

First English edition of the author's Nilbilder, which was first published in German in issues between 1871-1875, and again in 1881 in a form highly similar to this edition, which, according to OCLC was published near simultaneously between the two dates mentioned above. Carl (also Karl) Friedrich Heinrich Werner (1808-1894), one of the most important watercolour painters of his time, travelled to Egypt in 1864 (his third voyage to the Orient) and went up the Nile all the way to Nubia. These fascinating and very fine chromolithographs were produced from his original paintings, showing magnificent views and genre scenes, such as temples, mosques, Nile views, views of Cairo, pyramids, and so on. Each illustration comes with descriptive text by scholars, in particular the famous German naturalist - chiefly ornithologist - Alfred Edmund Brehm (1829-1884) and the Egyptologist Johannes Dümichen (1833-1894), who jointly wrote the preface. Dümichen "was tasked by the Prussian government to explore the Nile Valley in 1862 and 1868. On the first expedition (1862-65), along with investigations of the Nile Valley in Egypt, he also conducted extensive research in Nubia and the Sudan. In 1869 he accompanied the Prussian Crown Prince to Egypt on the occasion of the opening of the Suez Canal. On his fourth trip to Egypt (1875), he studied the inscriptions of the largest private tomb in the Theban Necropolis. In 1872 he was chosen professor of Egyptology at Strasbourg, where a new chair was created to compete with the famous chair of Egyptology at the Collège de France" (Wikipedia). One entry, not signed, is by Eduard Meyer. Bound in its original, very decorative, blind-stamped and coloured cloth with elaborate gilt, by J. F. Rösenberg in Leipzig. The binding is very well-preserved, with only some slight wear at the spine foot and bottom edge. Old owner's inscription in the top margin of the first blank recto; old repair to one tissue-guard; short tear in the margin of the leaf containing pp. 37-38. All the plates in excellent condition, spotless, and with strong impressions. A very good copy of this stunningly bound, luxurious classic. Kainbacher, p. 448 (German ed.). 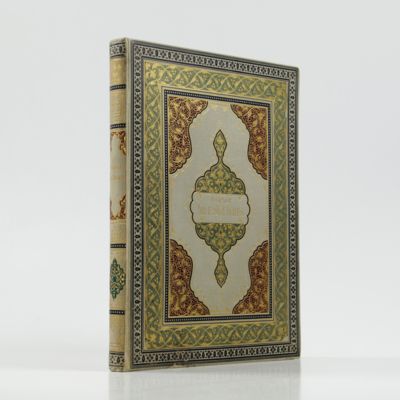 Nile-sketches painted from nature during his travels through Egypt.