This beautifully illustrated work written by the German malacologist Karl Eduard von Martens (1831-1904) is based on material collected by the German botanist and explorer Heinrich Carl Haussknecht (1838-1903), who was active in the Middle East and adjacent countries. It deals with two groups, viz., the terrestrial and freshwater molluscs from the Caucasus south to Iraq and Iran, and marine molluscs from the Caspian Sea and Arabian (Persian) Gulf. Several species are described as new. The spelling Hausknecht, with a single ' s' (e.g., in the title) is incorrect. Published in the series, Novitates Conchologicae, but not indicated as such (apparently also sold separately), and not specifically mentioned by Nissen. Bound in the rear is Oscar Boettger's Clausilienstudien, in photocopy - thus of no monetary value -, published in the same series. Provenance: stamp of the American malacologist Richard Irwin Johnson (1925-2020) on the title. Five text leaves with a crease and tear in the lower outer margin, otherwise very good, clean. Kabat and Boss, Karl Eduard von Martens (1831-1904): His Life and Work, p. 50. Not in Nissen ZBI. 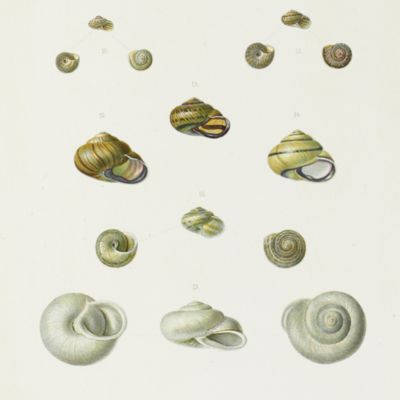